Last Saturday night, UFC on ESPN 27 took place in Las Vegas, Nevada. Headlining of the event was the clash between T.J Dillashaw and Cory Sandahagen. It was a very close and tough fight, where T.J managed to earn victory via split decision. At the beginning of the fight, T.J left eye was damaged very seriously, but cutman managed to stop bleeding so T.J continued the fight.

T.J managed to win the first and 3rd rounds with beautiful counter combinations and takedown attempts. Cory outstroke Dillashaw in the second and 4th rounds.

The final round was very intensive because both fighters knew that nothing was over yet. They have done their best to make a statement and earn the title shot after Sterling vs Yan 2.  Finally, T.J was controlling the center of the octagon and left a better impression on the judge’s mind. 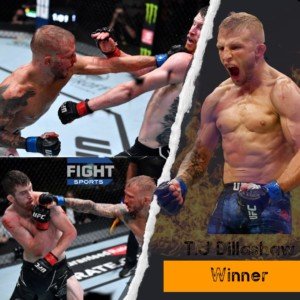 There were not many famous stars on the card, nevertheless, it was a great event to watch for MMA fans.
The co-main event of the fight was a very close fight, too. Where Raulian Paiva earned the victory against Kyler Philips via the Majority decision.

Judges left lots of question marks, while judges the fight between Women’s Flyweight bout between Miranda Maverick and Maycee Barber. Maycee Barber added another victory to his record via split decision, but a lot of fans and experts think that Maverick got robbed in that bout.

We also were able to witness great jiu-jitsu exchanges between UFC veteran Darren Elkins and Darrick Miner. There were a bunch of different kinds of submission attempts and rolls but finally, the Veteran of the UFC “The Damage” managed to TKO his rival.

Lennox Lewis open for a rematch against Mike Tyson in December

Merab Dvalishvili Says He Will ‘Never’ Fight Against His Friend, Aljamain Sterling

Merab Dvalishvili Says He Will ‘Never’ Fight Against His Friend, Aljamain Sterling