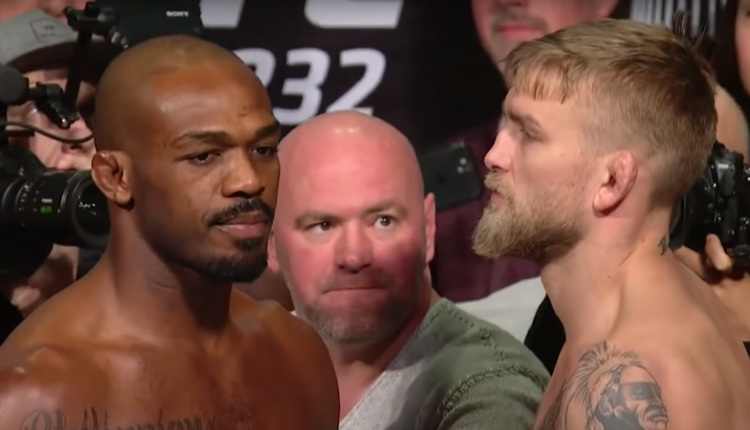 Jon Jones begins yet another comeback, and a new UFC light heavyweight champion will be crowned, as UFC 232 — surrounded by controversy and last-minute changes — takes place from The Forum in Inglewood, California.

In the main event, Jones faces Alexander Gustafsson to determine the UFC’s new 205-pound champion. UFC Heavyweight Champion Daniel Cormier, who was originally set to be stripped of the light heavyweight title upon the opening horn of this fight, surrendered it in a statement yesterday. Jones and Gustafsson originally met in a title bout five years ago at UFC 165, where Jones retained via a controversial unanimous decision.

Despite his comeback attempt, Jones is also at the center of the event’s controversy. It was announced on Dec. 23 that a drug test from earlier this month found fragments of Turinabol in Jones’ system, the same substance Jones tested positive for following his UFC 214 win over Daniel Cormier last year. Turinabol was also found in Jones’ system in August and September. The UFC and USADA cleared Jones, stating the ‘abnormalities’ are a ‘pulsing’ effect of the July 2017 one.

The Nevada State Athletic Commission, however, refused to clear Jones and wanted to do their own investigation on the matter. This led to the UFC announcing on the same day that UFC 232 would be moved from the T-Mobile Arena in Las Vegas to The Forum, as the California State Athletic Commission has given Jones a conditional license. As part of the deal, Jones will also undergo VADA testing.

UFC 232 marks just the fifth time Jones has fought in the past five years. Following the original Gustafsson win, Jones retained against Glover Teixeira at UFC 172 and Daniel Cormier at UFC 182 before being stripped of the light heavyweight title and suspended due to his 2015 hit-and-run incident.

Jones would come back and win the interim title against Ovince Saint Preux at UFC 197, but he would be stripped of that title in July 2016, mere days prior to a scheduled unification bout and rematch with Cormier. That second Cormier fight eventually took place the next year at UFC 214, with Jones winning the title back until the result was overturned to a No Contest due to his failed drug test.

Gustafsson, meanwhile, has gone 3-2 since losing to Jones, with his two losses being a title eliminator to Anthony Johnson and a failed UFC 192 title shot against Cormier. This will be Gustafsson’s first bout in 19 months, last competing in a May 2017 Fight Night event in his home country of Sweden, where he scored a fifth-round knockout win against Teixeira.

In the UFC 232 co-main event, UFC Women’s Bantamweight Champion Amanda Nunes looks to make history when she steps up a weight class to challenge UFC Women’s Featherweight Champion Cris Cyborg. With a win, Nunes will become the first woman and third fighter overall in UFC history to simultaneously hold two divisions’ titles in one promotion, as well as become the sixth fighter in promotion history to win titles in two different weight classes.

Cyborg has not lost an MMA match since her professional debut, going 5-0 in the UFC so far. Since winning the then-vacant featherweight title at UFC 214, she has retained against Holly Holm at UFC 219 one year ago and against Yana Kunitskaya back in March at UFC 222. Meanwhile, Nunes enters this fight on a seven-bout winning streak with three title defenses. Her most recent bout was back in May at UFC 224, where she stopped Raquel Pennington via fifth-round TKO.

Round 1: Jones and Gustafsson lock up right away, with Jones throwing a knee. Jones hits Gustafsson low with a knee, pausing the bout and getting a warning from referee Mike Beltran. A lot of light trading in the center of the Octagon. Jones looking for a counterstrike or looking for the chance to land a knee. Jones throws a head kick. Jones tries for a takedown, but Gustafsson just barely stuffs it, and the two briefly clinch once more. Superman punch attempt by Gustafsson. Gustafsson lands to the body, but can’t get a trip in on Jones. Gustafsson with a punch to the head. Jones circling to Gustafsson’s right. Not a lot of action and the crowd is restless. Jones hits a kick to the body.

Round 2: Jones lands a strike but misses a big overhand. Jones attempts a takedown but is once again stuffed, though he does throw another knee at Gustafsson on the break. A combo by Gustafsson but nothing lands, as Jones is working his range. Round kick to the body by Jones. Jones accidentally gets poked in the eye and time is called for the doctor to briefly check, verbally warning both Jones and Gustafsson for pokes to the eye. Gustafsson starting to break through, working combinations. Gustafsson misses an elbow. Jones working over the leg. Jones moving backwards but lands another leg kick. Jones clinches up briefly. He lands another couple of leg kicks, hurting Gustafsson. Jones throws a spinning back kick to end the second round.

Round 3: Jones gets a takedown early in the third and starts to land some hard elbows. Jones gets Gustafsson on his back in guard. Gustafsson’s trying to get out but Jones has him tied up, looking to get around the Swedish fighter. Jones takes Gustafsson’s back and lands some hard ground-and-pound until referee Mike Beltran stops the fight, making Jones light heavyweight champion once again.

Round 1: Both women come out swinging wildly at the start. Cyborg manages to back Nunes up to the cage wall, walking through Nunes’ punches. But suddenly, Nunes rocked Cyborg. Cyborg attempted to fight back, but she was still rocky, and a couple of more punches to the head knocked Cyborg out cold. Nunes makes history!

Pacquiao Not Concerned with Broner’s Arrest