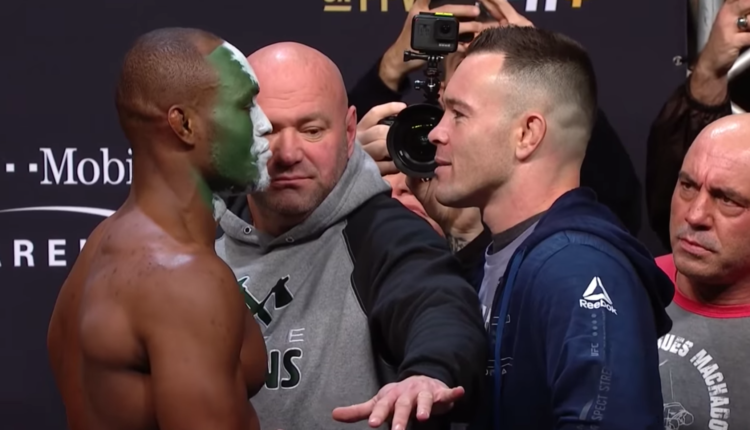 The UFC’s final pay-per-view event of 2019 is a stacked one, as three title fights — featuring a heated rivalry and two division greats — top UFC 245, which takes place at the T-Mobile Arena in Las Vegas, Nevada.

In the main event, Kamaru Usman makes his first defense of the UFC welterweight championship, as he faces a man he has traded barbs and nearly brawled with for months now, former interim champion Colby Covington.

Usman, the winner of The Ultimate Fighter season 21, won all nine bouts he had in the UFC, including major wins over Demian Maia and Rafael dos Anjos last year, before receiving a title shot against Tyron Woodley at UFC 235 in March. Usman dominated Woodley like so few, if any, ever had, sweeping the scorecards en route to winning the title.

Covington, who sports an identical 15-1 record to Usman, has gone 10-1 in the Octagon and has won seven straight. After solidifying his outspoken heel persona following an October 2017 win over Maia, Covington defeated RDA at UFC 225 to win the interim welterweight title. He was stripped of the title after being unable to unify with Woodley but returned with a win over Robbie Lawler in August at UFC Newark.

The co-main event will see Max Holloway look for a fourth successful defense of the UFC featherweight championship and 15th straight featherweight win, as he faces the challenge of Alexander Volkanovski, who is on a 17-fight win streak and is 7-0 in the UFC.

Also featured will be current two-division champion Amanda Nunes, who defends the UFC women’s bantamweight championship against Germaine de Randamie. Nunes will be looking for a 10th straight win and fifth defense of the female 135-pound belt, while GDR, the former featherweight champ, wants to extend her own win streak to six.

The rest of the main card sees former longtime featherweight champion Jose Aldo make his bantamweight debut against recent title challenger Marlon Moraes, and Urijah Faber looking to continue his comeback, and for potentially one more title shot, as he takes on Petr Yan.

Tyson Fury Is ‘Sick Of’ Anthony Joshua And Dillian Whyte

Give Us Sixty Seconds and Fight Sports Will Update You On Today’s Top Boxing/MMA Stories!