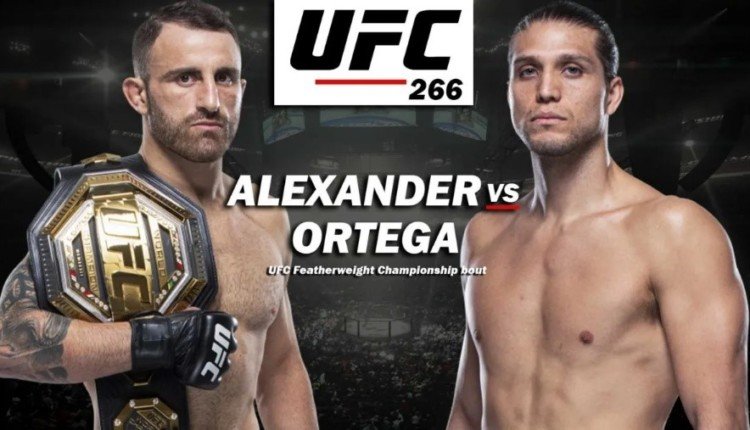 UFC 266: Two Title Fights and a Five-Round Clash of Veterans.

UFC 266 is going to be one of the most interesting PPVs of the year. This event is scheduled for September 25 in Las Vegas, Nevada. The event’s headlining will be a Featherweight title bout between current champion Alexander Volkanovski (22-1-0) and #2 ranked contender Brian Ortega (15-1-0).

Alexander “The Great” has dethroned Max “Blessed” Holloway on UFC 245 fight card and defended his title for the first time in their rematch at UFC 251. On the other hand, Brian Ortega has already lost his first opportunity to win the UFC title at UFC 231.

T-City needed almost 2 years for full recovery after defeat in the title bout against former champion Max Holloway via Doctor stoppage at the end of round 4. Nevertheless, shaved Ortega came back and looked in phenomenal shape against Korean Zombie.

Another title fight will be held on the UFC 266 card as the Co-Main Event. Valentina “Bullet” Shevchenko will try to defend his title against Lauren “Lucky” Murphy with a current streak of 5 wins.

With all this, MMA fans will have a pleasure to see Diaz’s Army leader, older brother Nick Diaz, going to be fighting Robbie Lawler for the second time after 17 years. At UFC 47, Nick Diaz and “The Ruthless” shared the octagon for the first time, where Diaz managed to KO Robbie. It will be the second 5 rounder fight in UFC history, which will not be the main event or the title fight.

The fight card of the UFC 266 is not finalized, but we already know that there will be two more exciting fights on the main card. The heavyweight bout between Curtis Blaydes and Jairzinho Rozenstruik, and Bantamweight clash between Marlon Moraes and Merab “The Machine” Dvalishvili.

Curtis Blaydes will grace the octagon from inside for the first time after losing against “Black Beast” Lewis via Cold KO. Jairzinho will try to continue his winning streak and get closer to his title shot.

Georgian fighter, The Machine will try to earn his 7th victory in the UFC. He will avenge his close friend and sparring partner, current champion Aljo Sterling and get 1 step closer to his title shot or top 5 opponents.

Very Experienced Brazilian Marlon Moraes will try to get back in business after two losing streaks. He has lost 3 out of the last 4 fights, and all of them via TKO. So, he needs to make a statement.

Josh Warrington Gets His Rematch Against Mauricio Lara On September 4

Kamaru Usman Or Canelo Alvarez, Who’s The Best Pound-For-Pound Fighter Of The World?…