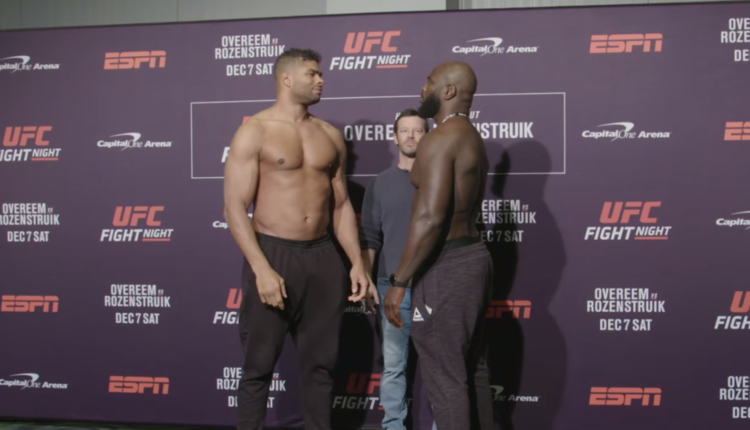 The heavyweight division will be center stage at UFC Washington D.C. with one man looking to get back to another title shot, while another looks to continue a meteoric rise up the ranks.

Alistair Overeem faces Jairzinho Rozenstruik in the UFC Washington D.C. main event at the Capital One Arena in the United States’ national capital.

The fight was originally booked as Overeem vs. Walt Harris before Harris withdrew from the bout on November 1 due to a family tragedy.

Overeem, currently tied for the sixth spot in the UFC’s heavyweight rankings, won seven of nine between Winter 2014 and Summer 2017 before running into Francis Ngannou at UFC 218 and Curtis Blaydes at UFC 225. Since then, however, Overeem has rebounded with back-to-back first-round finishes of Sergei Pavlovich and Alexey Oleynik at UFC Beijing and UFC St. Petersburg, respectively.

After going 2-0 in MMA in 2012, Rozenstruik moved to the sport full-time from kickboxing in 2017. He went 4-0, including a split-decision win in RIZIN, the only non-KO/TKO win he’s had thus far, before making his UFC debut earlier this year. Rozenstruik’s tenure in the Octagon so far has seen him finish Junior Albini at UFC Fortaleza, knock out Allen Crowder in nine seconds at UFC Greenville and knock out former champion Andrei Arlovski in 29 seconds at last month’s UFC 244 event.