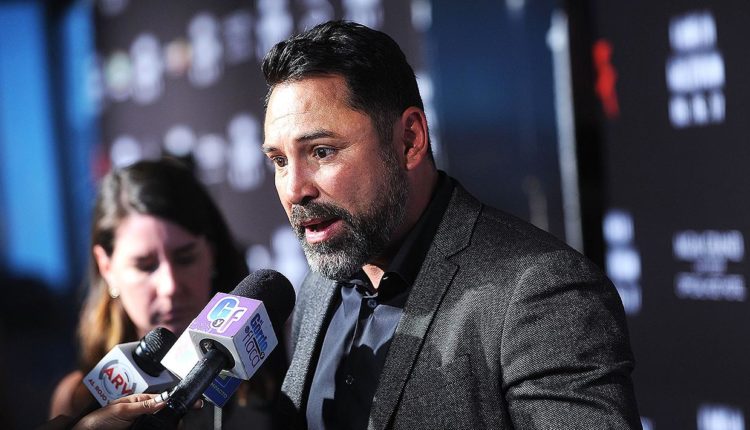 After teasing that he would wait and see how Mike Tyson’s comeback fight would go before making a decision, Oscar De La Hoya has changed his mind. “The Golden Boy” is officially ready to return to the ring.

Speaking with ESPN’s Steve Kim, De La Hoya discussed the rumors, which were started by him, regarding a comeback. As far as who he would face, the 47-year-old is ready to fight legitimate competition in the ring.

“The rumors are true, and I’m going to start sparring in the next few weeks,” De La Hoya said. “It’s a real fight. I miss being in the ring, I love boxing. Boxing is what gave me everything I have today, and I just miss it.”

The Golden Boy can still snap that jab 👀

Winning world titles in six weight classes, De La Hoya has had bouts with some of boxings best, including Felix Trinidad, Julio Cesar Chavez, Floyd Mayweather, Manny Pacquiao, and Shane Mosely. The Pacquiao bout, which ended in corner retirement, was the last of his career. As to whether he can have better fights than he did in his last bout in 2008, De La Hoya feels motivated.

“Look, my last fight with Pacquiao, I weighed in at 145 and obviously that was a shell of myself,” De La Hoya went on to say. “Look, it’s been a long time, yes. But actually my jab feels faster than ever. I have to make sure that my conditioning is perfect, my health is good. And that’s going to take place in the next few weeks. So we’ll see.”

As far as who he would want to face, De La Hoya has stated he is interested in facing the top competition out there. That may include Canelo Alvarez, who has been fighting under the Golden Boy banner for a few years now.

After competing in the ring, De La Hoya has worked outside of it with Golden Boy Promotions. Working with fighters like Ryan Garcia and Canelo, De La Hoya has been molding boxing’s future. He doesn’t like what he sees from many young fighters now, however. If he gets a chance to face them, De La Hoya will look to teach them a lesson.

Stay tuned, as more details should be revealed regarding De La Hoya’s comeback.

Where To Watch: David Benavidez Vs. David Lemieux

Floyd Mayweather Vs. Don Moore Exhibition Moved To Abu Dhabi For This Saturday

Where To Watch: David Benavidez Vs. David Lemieux

Where To Watch: Holly Holm Vs. Ketlen Vieira Tonight

Larry Holmes Retains Heavyweight Title With Controversial Decision Win Vs. Tim Witherspoon – May 20, 1983 (This Day In…