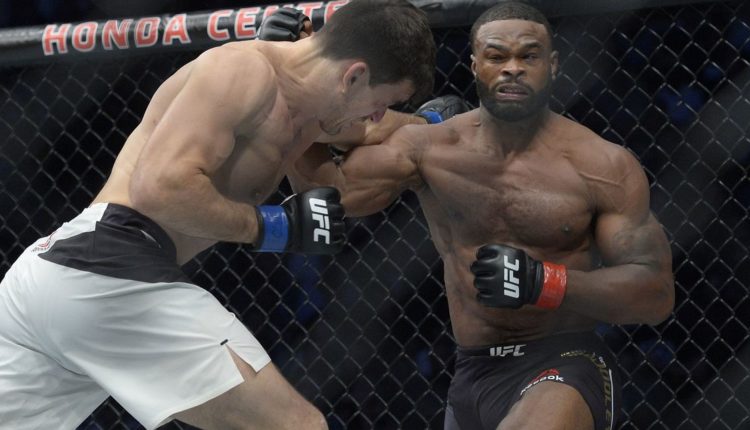 UFC Welterweight Champion, Tyron Woodley appeared on the MMA Hour yesterday. While on the program, Woodley called out UFC head Dana White regarding comments about Woodley’s performance at UFC 214.

White claimed that Woodley could have finished off his opponent Demian Maia as early as the second round on Saturday night in Anaheim,even though Woodley suffered a torn labrum in the first round of the five round encounter.

White would be quoted to say that Woodley “didn’t want to take the risks,” and if “you ask fans if they want to see Woodley fight again, I think that will be a flat out no.”

Yesterday on the MMA Hour, the champion railed against the outspoken UFC boss saying…

“Promote your champion. Don’t demote your champion. I threw my shoulder out in the first round, I wasn’t able to throw any damaging shots — for you guys who don’t understand what a labrum tear is, go get on Google or Wikipedia and figure it out — and I still stayed the course, I stayed on path, I stayed on point, I executed the gameplan. I had to reduce all of my shots from overhands, uppercuts, things that were hurting my shoulder, to straight punches.”

“So, sorry in advance, I’m mad because I’ve had this surgery before. It’s not a fun one. It’s not a quick recovery. It’s not something that I’m excited about. I’m going to get a couple second opinions. Literally I’m in the Uber right now, I just f***** got out of the doctors office, like right this second. There’s paperwork in my hand. So I’m just, I’m owed a public apology. You’re going to publicly scrutinize me, Dana White? You publicly need to apologize to me.”

Woodley go as far as to threaten the UFC with leaking information, but when pressed Woodley would decline to elaborate.

You can watch the whole video now via the MMA Hour.