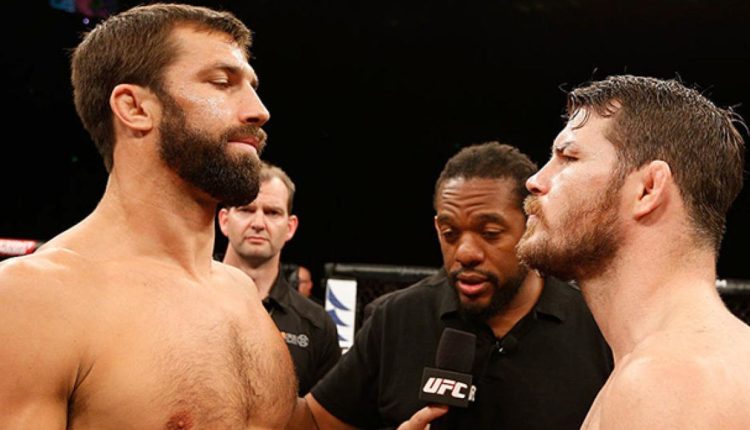 On Monday’s edition of the MMA Hour,  Luke Rockhold decided to call out the two men in the main event of UFC 217, Michale Bisping and Georges St-Pierre.

Bisping is the current middleweight champion, yet isn’t the undisputed champion of the division due to Robert Whittaker holding the interim crown, and Rockhold says that neither man would face Whittaker if they win in November at Madison Square Garden.

“I don’t believe Bisping will, either…He’s ran this far. He’s finally gonna come up and get a payday. Either way, I don’t think either one fights any of us.”

In June 2016, Bisping was last minute replacement at UFC 219 when he would knockout Rockhold to win the middleweight title. Bisping has only defended the title once since that fight when he defeated Dan Henderson in November of that same year. It aggravates Rockhold due to fighters like himself, Whittaker, as well as top contenders Yoel Romero and Ronaldo Souza have been left out of title contention so Bisping can fight “attractions.”

At UFC Fight Night Pittsburgh, Rockhold would go as far to say that GSP shouldn’t even step into the Octagon in November.

“GSP, he’s overstepping his boundaries. He’s jumping into a world that he’s not ready for. I mean, even if he were to win this fight, he’s unprepared to fight any of us. That’s not gonna happen. It just doesn’t make any sense. And it’s annoying. It’s what we all worked for, is to get to that title. To have that thing held hostage is frustrating. The direction this company is going, just feeding the people this bullshit. I fight to get the title, I fight to be the best. There’s two of them out there and I’m trying to hunt one down. So, obviously Bisping is my first priority. If not, Whittaker is there.”

Last week on The MMA Hour, Bisping critiqued Rockhold’s performance against Branch, which was a bit shaky early in the first round. Bisping said Rockhold struggles against those who have good boxing skills.

On Monday, Rockhold laughed that off.

“If he wants to think that I’m vulnerable in that realm or any of those realms, please,” Rockhold said. “Sign the contract. I’ll be ready to go. As a matter of fact, if Bisping were to sign to fight with me, I would promise you and the world, I would bet on it. I would not shoot for one takedown. This would purely be a stand up fight. I’d give him every opportunity to implement his boxing, get on the inside. … I f*cking guarantee you, I will finish you on the feet. With all the holes in my game, I will pick you apart.”

Rockhold will have to wait as he might have broken his foot against Branch, so will need time to mend. The former champion is though quite willing to jump in on short notice if a title opportunity opens up. That’s what Rockhold wants next — some kind of title shot. Whether it’s against Bisping or Whittaker. The belt, Rockhold said, is where the money is.

“I want money fights,” Rockhold said. “And of course that’s what I’m here for. I’m 33 next month. I’m not getting any younger. i want to set myself up. I’m not fighting for little change, I want the money.”

Watch: The Draw In The Desert – Canelo-GGG Recap