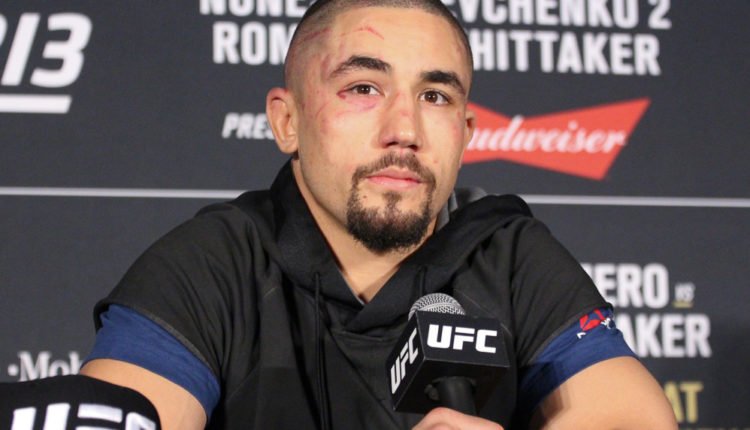 Whittaker On Recent Run: ‘I Just Wasn’t Myself’

With rumors floating all over on his status, Robert Whittaker decided to clear the air himself.

The former UFC Middleweight Champion hasn’t competed since losing the title to Israel Adesanya at UFC 243 in Melbourne, Australia in October. He then pulled out of UFC 248 against Jarred Cannonier, with the rumor being he was donating bone marrow to his daughter. Whittaker (20-5) is unsure how that got started, but that was not the reality of the situation.

“I have no idea where that came from,” Whittaker told The Daily Telegraph. “During the break, I got off all social media to spend time with family. So it was my old man who actually contacted me, explaining there was this crazy rumour going around. And from there, it just got a life of its own. But my kids were all fine. They are fine.

“It was me who had the issue.”

Whittaker has had to deal with injuries and life events throughout the latter half of his career. The 29-year-old has had an abdominal hernia, a medial knee injury, and chickenpox. His schedule has been tough due to the challenges that have come his way. The training involved, which required to be away from his family for weeks, took a toll on him.

“I sacrificed everything,” Whittaker went on to say. “My team suggested several plans which I took to. And because it worked, I just kept at it. But you can’t keep doing that forever. You just can’t. Worse than the physical grind too, was the mental drain. And every time I missed an event, or had to leave early, whenever I trained through Easter, or ran Wanda dunes on another Christmas Day, each one became like suffering a knock.”

Fighting professionally since 2009, Whittaker joined the UFC in 2012 and won The Ultimate Fighter: The Smashes Welterweight Tournament. His schedule included a who’s who of fighters: Brad Tavares, Uriah Hall, Derek Bunson, Ronaldo Souza, and Yoel Romero twice. Those two wars with Romero drained him.

Following his withdrawal from UFC 248, Whittaker posted a message onto social media stating he needed to slow down and focus. Climbing up the Wanda dunes on Christmas Day provided the ultimate realization of that need.

“As soon as one fight is over, you have another title fight on the way… You bite down on your mouthguard and work through,” Whittaker said. “And physically, we were training at an intellectual level… But again, mentally I was burnt out. And you can only do that so long before you wind up in a fight below your mental best. I just wasn’t myself.”

With rumors of a bout against Darren Till sometime this year, Whittaker has managed to turn everything around. With a new team and training program, Whittaker is taking time for his family while also looking out for himself. A different change of pace, the new lifestyle could help him be the man he believes he can be.

“The changes I’ve made, it really will change my life,” said Whittaker. “Not training to exhaustion every day, I guess you can say I’m living.”

Coker Believes Gallagher Is Close To Receiving A Title Shot