At the 2012 Olympics, Anthony Joshua would solidify his Olympic legacy, and set off on becoming the biggest heavyweight in boxing. Now, one of the men who fell on Joshua’s path to a second gold medal is looking to bolster Joshua’s platform, and beat him for his titles.

Zhang Zhilei returns to the ring in his native China on Friday and feels that a fight between the two undefeated heavyweights would bolster Joshua in the States and China, as well as his global appeal. 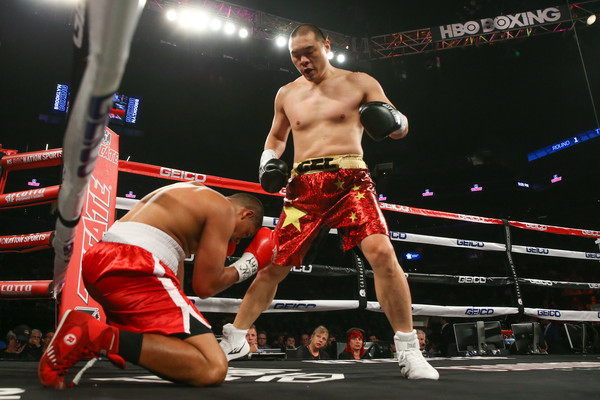 “China has a top market and great business opportunities,” Zhilei said recently in an interview. “[Joshua] always fights in the UK. If he doesn’t want to take the chance and fight in China, we should fight in the US.

“Chinese fans are starting to follow professional boxing a lot, plus China has great atmosphere for boxing. I’m the only heavyweight people want to follow in China. I got a lot of fans from China asking me when my fight will be and what my training looks like. People want to know about me. This is one of my biggest motivations.”

When asked about what he’d do differently if the two faced one another, he believes going for a knockout was short sighted. “I went inside the ring thinking the only way to win that fight is to knock him out, which was the wrong strategy and got me over anxious,” Zhilei said about their 2012 Olympic quarterfinal fight. “Now me and my trainer Shaun George are working on a lot of good stuff in the ring. People will see that I’m totally different.”

I’m targeting all belts. I believe in order to be the best I have to beat the best. Now everyone is saying that Joshua is the best fighter, so I will go against him to get those belts.

Rockhold On Holding Off On 205 Move