Sato and Buakaw At It Again 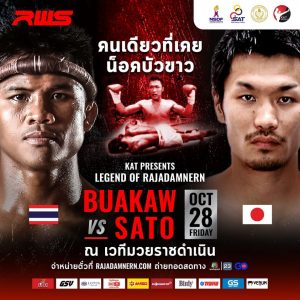 Japanese K-1 World MAX superstar Yoshihiro Sato is coming out of retirement to face his nemesis Buakaw Banchamek – the two have met four times during their career.

On Friday the 28th of October 2022 Sato and Buakaw comes face to face in the ring again for the fifth time, enabling Buakaw a chance to get revenge on his Japanese colleague. Sato is the only one in the world who knocked out Buakaw, and sent him to sleep 14 years ago at the K-1 World MAX 2008 final.

The fight will be another exhibition fight for Buakaw at “Raja” – this time under Kickboxing rules.

In the meantime let’s see how it went down, when the two elite warriors came face to face in Japan in 2008: